The Spiritual Essence Of Home.

The Spiritual Essence Of Home.

The spiritual heart of any country is, I believe, to be found not only in its history and traditions but also essentially in its indigenous population. Folk-lore and local legends passed from generation to generation may serve to mold the peoples minds, but is there perhaps something more, something unknowable that works a mysterious magic on those that are born and live within a given area? Could the mystery really be a Jungian collective subconscious specific to location that permeates the atmosphere and environment creating a spiritual essence that we call home? For we all do recognize where home is, like a magnet swings to the north we aim for the land of our birth where we feel we belong.

My own home is in the county of Lancashire, situated in the North West of England, some two hundred miles from London. It was once a huge area with major cities such as Manchester and Liverpool within its boundaries. Those boundaries changed dramatically in the early 1960s reducing the Red Rose County to less than half its size. Today, Lancashire is more a state of mind, but it still exists, the boundary changes have effectively altered nothing.

Charles Nevin, a author and journalist, born in St. Helens, set out to discover the spirit, the heart and soul of the county in his book ‘Lancashire; where women die of love’. The title is a quotation from Balzac the great French novelist. Nevin’s journey of discovery started in a boarding house in Blackpool, noted for fresh air and fun, where he found that the archetypal landlady, all rules and regulations, lived on. ‘I asked Mrs. Harris what had happened to the battleaxe Blackpool landlady of legend. ’A myth!’ she replied. Just then someone arrived. ’I hope he’s not come in for his breakfast, because it’s cold’. Said Mrs. Harris. Clearly the current incumbent failed to recognize that she was the new edition, the very epitome of the myth she so disparaged. 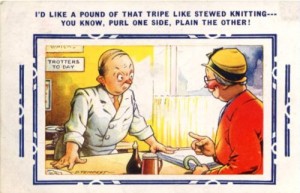 On the outskirts of Wigan, a town insulted by George Orwell in his book ‘The Road To Wigan Pier’, Nevin found that some there believed it connected with King Arthur. There is, in fact, a theme park called Camelot at Standish just down the road from the pier, which really does exist, it’s a jetty on the canal once used by the barges bringing coal etc. to the mills. Camelot boasts ‘jousting knights battling for good against evil’. Seeking the source of this idea Nevin contacted the original owner of Camelot, Mr. John Rigby. Rigby explained that the concept came from a discussion he had with a professor from Manchester who had told him of the legend of King Arthur’s battle at Wigan close by the river Douglas which flows through the town. When Nevin asked at the local post office if anyone knew about this the postmaster replied ‘maybe that would explain why they’re always fighting round here’.

Lancashire has produced many famous comedians and the county is noted for its whimsical sense of humour. Nevin lists some well known names, George Formby, Gracie Fields, Frank Randle, Tommy Handley, Les Dawson, Ken Dodd, Eric Morecambe, Victoria Wood, Peter Kay, Steve Coogan and Stan Laurel all were born in Lancashire. There exists in Ulverston, Cumbria (ex-Lancs.) a museum to the memory of Laurel and Hardy, Stan, the thin one from the comedy films, was born there. When Nevin visted this museum he found it to be a ‘joyous jumble, a heady hymn to clutter and benign disorder. In short, exactly like Stan and Ollie themselves, another fine mess.’ One exhibit, believe it or not, is the toilet seat that belonged to Stan Laurel. Ulverston has another claim to fame, it is the place where pole-vaulting was invented. According to local legend the farmers used poles to leap over ditches.

GEORGE FORMBY: With My Little Stick Of Blackpool Rock.

Reading Nevin’s book on Lancashire caused me to ponder on the nature of the place, not as a geographical location, but as a way of being. The people Nevin describes, such as the Wigan taxi driver who when asked if he can drive him to a certain public house replies ‘If I have to’ encapsulate the essential attitude of Lancashire. The comment made by said taxi driver being a whimsical opinion on the selected destination and not on the task itself. Being a Lancastrian I recognized the style as being typical, as though the man was faintly amused at the thought of someone wanting to visit that particular pub.

Each area, each county of the UK seems to have its very own attitude or mindset. The folk of Yorkshire, the county adjoining Lancashire, have a totally different approach to life. There is a famous rhyme about people from Yorkshire: ‘You must hear all; you must say nothing. You must sup all; you must pay nothing. And if ever you do anything for nothing, do it for yourself.’ Despite the close proximity of Yorkshire to Lancashire there is a noticeable difference in the nature of the population. In Lancashire people are friendly, helpful, generous, funny and obviously amused at life in general. This is not so in many other areas of the UK. For example, without wishing to cast aspersions, can you imagine a London taxi driver light heartedly alluding to the undesirable nature of an establishment to which his fare requests to be driven, or a postmaster in Cheltenham commenting adversely about the pugilistic predilections of local residents?

So what is it within a given location that creates recognizable character traits? Charles Nevin’s book appears to conclude that it is generational, attitude passed down over the ages from father to son. That is, without doubt, a major factor, but I also believe that the very ground itself holds folk memories and that these are assimilated into the being of residents via a form of subtle psychometric infusion. The result being a kind of collective sub-conscious base upon which the individual character develops producing unique minds supported by the same intangible infrastructure. There is, as they say, no place like home and is it not strange that deep within us we each instinctively know where it is?

Lancashire, Where Woman Die of Love. By Charles Nevin Published by Mainstream Publishing ISBN 1-84018-871-5 is available at all good bookstores or via the internet at Amazon.co.uk Click the book cover shown above to go direct to Amazon.co.uk