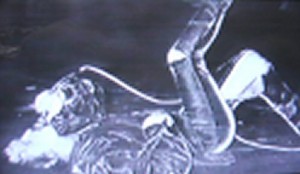 P.J. Proby tearing his trousers on stage in January 1965. 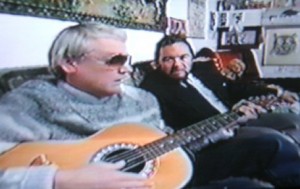 In April of the year 1990 I wrote a song for the 1960’s Rock ‘N’ Roll soul singing, trouser splitting, Pop Star P.J. Proby. Proby was an American from Texas brought to the UK in 1963  by the BBC TV producer Jack Good who featured him in the first Pop-Music special ‘Around The Beatles’. It was a certain ticket to instant fame and soon P.J. Proby, with his pony-tailed hair, buckled shoes, velvet trousers and way over the top, sexually charged, stage antics was a massive hit maker. His songs were always loud and overblown, especially the ballads such as his definitive, angst ridden,  drawled and groaned version of ‘Somewhere’ or Summ..Ahhh…Wurrrr, as he pronounced it. He was  singing like an inebriated Romeo to a love he had lost in the mists of a dozen double Jack Daniels on the rocks.  And on the rocks Proby soon was as his career shipwrecked over allegations of public indecency when he ripped his velveteen pants on stage at Croyden in January 1965.

Mary Whitehouse led a campaign to have Proby banned and soon his star, that had shone so brightly, was falling fast. He fell from fame alongside The Beatles, (Paul and John wrote a song for him that he recorded with their producers: ‘That Means A Lot’) to the chicken-in-a-basket Northern Club circuit and obscurity.

From there Proby declined further into bankruptcy, alcoholism, even being charged with attempted murder for shooting his wife and, eventually, utter destitution.  It was whilst he was living as a none paying lodger in the broken back streets of Bolton, Lancashire that I found him, washed up on a tide of Carlsberg Special Brew and cheap wine.

In May of 1990 I called to collect Jim Proby at his home and drive him to a recording studio in Preston, Lancs. He had heard the song I had written (Stage Of Fools) and agreed to record it, for payment in cash. After a great deal of messing about, that included me having to go and buy his booze and show him his fee in used notes, which I refused to pay prior to the recording, we set off in my car. It was about 6 p.m. and the evening was darkening early with storm clouds sweeping in from the west. As we traveled along the M61 motorway leading towards the junction with the M6 the traffic began to slow and we became stuck in a line of stationary cars. PJP was sitting by my side sipping from a can of Carlsberg Special, he seemed calm and other than the regular slurps he made as he swigged his booze the car was quiet. Then, as if from nowhere, I heard music, looking in my side mirror I saw approaching, in the outside lane, a huge white American limousine with blacked out windows. This amazed me as the other traffic was stopped and there were no cars in the outer, fast, lane. I watched the limo. as it gradually approached  then as it drew almost level I saw that the front blacked out window was half down, it was from this window that the sound of music was coming, the song on the stereo player was the 1964 recording of P.J. Proby singing Somewhere.

I have rarely experienced anything that felt so weird, the entire area seemed almost supernaturally still. Apart from the sound of Proby’s voice and the orchestral strings surging behind his words there was only the silent twilight and the man himself by my side. I turned to PJP and he was staring with cold eyes at the now distant limo. and the fast fading sound of his long ago self singing of a place where there is time to care. As I watched, utterly startled by this, the limousine disappeared into the traffic like an insubstantial dream. Yet it was impossible for the vehicle to do that as all the cars before us were locked solid, bumper to bumper. I asked PJP if he had heard and seen what I had; ‘Never believe it if I tell ‘em’ he said.  But the knowing look on his face told a different story.

It took us over two hours to get to the recording studio just five miles from where we had seen that mysterious white limousine. When we arrived at the building, late, the sound engineer told us that the reason for the traffic hold up on the motorway was a fatal accident at the junction of the M61 and M6, three people had been killed.  The song we recorded that night was a demo of ‘Stage Of Fools’ and P.J. Proby sang like an angel, a dark angel, his voice was absolutely incredible, exactly as it had been all those years before when he had sang his enigmatic version of Somewhere.

In June of the same year, 1990, I had arranged with P.J. Proby to take him to a recording studio in the Newcastle-upon-Tyne area. So on the day I arrived at his lodgings in Hatfield Road, Bolton to collect the man and drive up to Newcastle where I had booked us both in to The Holliday Inn prior to the recording session the following day. When I arrived at PJP’s place he was in a belligerent, aggressive mood demanding that he be flown to the hotel by helicopter. His actual words were, if memory serves me well; ’No helicopter, no record’. Now Bolton is not Heathrow Airport and there was no way I could possibly hire a helicopter so it was out of the question. What I did do was offer him his fee in advance, when he saw the money he signed the contract, got in the car and off we went en-route to Newcastle-upon-Tyne.

The next morning we were scheduled to start recording at 10 a.m. but at 9.30 a.m. PJP was still flopped out on his bed in The Holliday Inn watching cartoons on TV. You may imagine that this caused me some degree of concern as recording studio time is expensive. Using my usual charm I attempted to persuade Jim Proby to get his Texas backside into gear, but he declined. I was about to help him off the bed with my heavy duty walking-stick when the cartoon programme on TV was stopped for a news flash. A newscaster appeared on screen saying that there had been a fatal accident at Newcastle-upon-Tyne airport, a Jet Ranger helicopter had crashed into overhead electric power cables killing both the pilot and passenger. P.J. Proby looked at me with a strange glint in his eyes, got up off the bed, put his coat on and said ‘Time we went to the studio John’. I can clearly recall the sense of unreality that I experienced as I heard that news-flash and saw the look on Jim Proby’s face. It was as if he had been waiting for this to happen. Then I remembered………

As strange as that was there is yet an even stranger connection concerning P.J. Proby and that fatal helicopter accident. In the U.S.A. from 1960 to 1963 Jim Proby had been signed to record for Liberty Records under another name, that name was Jett Powers. The helicopter that crashed was a Jet Ranger and it had collided with overhead power lines.

This is a recording of P.J. Proby when he sang under the stage name Jett Powers.

Here is another recording of P.J. Proby when he was still JETT POWERS in 1959.