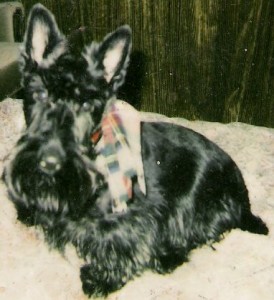 In the year 1997 my book PSYCHIC PETS was published by Bloomsbury Books and in it was featured a story about a little Scottish Terrier called Sutty Dog. The dog was in fact the pet of my daughter Dulcie Jane and the two were very close. Sutty Dog actually would sleep in Dulcie’s room and followed her round the house. They played together in the back garden and for years the two were best of pals. Time passed and Dulcie became a young woman, she still did play with her Sutty Dog but, as young women will, she began making other friends.

As Dulcie began bringing her new friends home we all noticed how protective little Sutty Dog was of her pal.  As soon as anyone new came into the house Sutty Dog would run to Dulcie’s side as if guarding her and growl then bark at the strangers if they got too close to her pal.  Then, one fine summer’s day Dulcie told us all that she was bringing a young man to meet us and she said he was called Robert. My wife Mary and I kind of new that this young man was not just a friend but we said nothing and as for Sutty Dog, well we fully expected she would give Robert a proper barking at if he got too close to Dulcie.

It was, as I recall, late on a Sunday afternoon that Dulcie arrived home with Rob Dowrick by her side. Sutty Dog ran up to her and jumped up licking Dulcie’s hand and then, to our absolute astonishment, she did the same to Rob. It was as if she knew he was to be trusted with Dulcie. After that Sutty Dog and Rob were pals too and we always said that it was Sutty that had picked the boyfriend. She had woofed like a wild thing at all the others so in a way she had.

Later the following year Dulcie Jane and Robert Dowrick were married and Sutty Dog was there to wish them a happy honeymoon as they set off from our home to fly to Tenerife. Dulcie and Rob sent a card from their honeymoon to Sutty Dog their pal and I can still see that inquisitive look on her face as I showed it to her.

Following the publication of Psychic Pets I was asked to appear on numerous TV shows promoting the book. Dulcie let me take Sutty Dog along as she was one of the star pets featured in her story: Sutty Dog and Dulcie Jane. The Dog That Picked The Boyfriend.  It was with Sutty Dog that I enjoyed over thirty minutes of prime time TV on Richard and Judy’s THIS MORNING, we had great fun together.

Sadly, as time passed Sutty Dog became older and gradually confused. Her health finally failed and one dark day the decision had to be made to place our friend beyond the pain of a physical reality that had become too much to bear. I called for the vet and asked my wife if she would prepare a grave in the garden near to where Sutty Dog had enjoyed so many happy hours playing with her pal Dulcie Jane and our other pet Grumbles the bulldog. I was sitting with Sutty Dog talking to her about the time we were once almost famous together and she sat still, looking up absolutely trusting me.  It was an extremely difficult moment as we spent her last few minutes waiting for the vet to arrive.  As we did so I heard a call from the garden, it was my wife Mary shouting to me saying that I should come and look and help a bird that had been injured. I went outside and saw there a blackbird standing still on the flags near the ground where the open grave stood waiting for Sutty Dog. I noticed the bird seemed unafraid of me which is most unusual for a wild creature. But it was clear that it was not injured.

After the vet had completed his duty and I held the now lifeless body of my little pal Sutty Dog I handed her to Mary who took her out and placed her into the grave. Gently we covered her in the earth and then stood quietly recalling the many happy days we had all shared and the time, not so long ago, when she had welcomed Rob Dowrick our fine young son-in-law and father of our wonderful grandson Aaron into our home. Then, much to our astonishment, the blackbird that Mary had thought was injured hopped across the ground and stood at the edge of Sutty Dog’s grave. It was within just a few feet of us and looked directly at me, paused and as I watched in amazement the bird flew straight up into the sky and disappeared into the blue. It was as if the bird had come to collect the soul of our friend Sutty Dog. 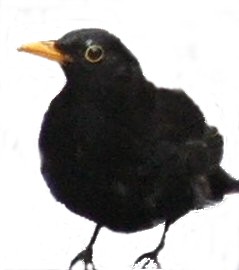 Some few weeks ago my wife Mary told me I needed an haircut as my long gray locks were, she said ‘a right mess’. To show me what she meant Mary took a photograph of me sitting at my computer to let me see how long my hair had grown. When I opened the picture file on my computer both Mary and I were startled to see that instead of seeing my messed up hair we were seeing Sutty Dog. 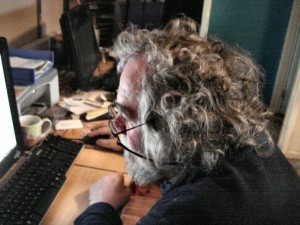 The Ghost Of Sutty Dog.

The picture is here as you can see, that is one hundred percent our pet Sutty Dog she had returned and materialised in a photograph as if sitting on my shoulder.  I know Sutty Dog has come to see me for a reason, she was my friend too.