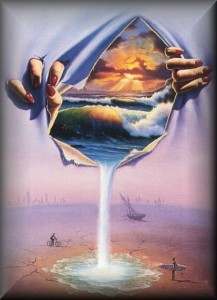 The basis of the Spiritualist faith is communication between the incarnate and the discarnate. Such communication is most usually through a spirit-medium who has a developed gift be that clairaudience (hearing the voices) clairvoyance (seeing and also hearing) or clairsentience (sensing the information).  As Spiritualists we accept that such communication is possible and when a medium passes on a message to us from our departed loved ones in the next world that message is truthfully given. However there are now and no doubt there always have been, tricksters, charlatans, out and out fakes that pretend to communicate but are really having a laugh. One only has to put the television on these days to see some fool in a dark house spooking up imaginary ghosts. The biggest offender of all the fake ghost hunting TV shows was Most Haunted which at one time featured a psychic who claimed to channel the spirits and pretended to go into a trance. On one notable occasion this prankster even managed to channel an imaginary, totally fictitious character called Kreed Kafer, invented by the resident parapsychologist to test his veracity. That is the name Kreed Kafer and a false story about this character were fed to the so-called psychic who swallowed the bait and pretended to channel him. You can see the result on the internet at YouTube.com there is the video showing this fraud doing a fake trance routine and putting on a stupid voice shouting ‘KKKreeeed…..KKKKaaaaafer’ Which as the parapsychologist knew when he designed this test was an anagram of DEREK FAKER. The faker being set up was of course Derek Acorah.

Such ridiculous nonsense as Most Haunted has had a deleterious affect upon Spiritualism and Psychic-Mediums in general as the public, who are hoodwinked by this bilge, believe that trance communication and ghosts appearing left right and centre are what actually happens during a clairvoyant consultation. It is not as if Spiritualism needs any more enemies, we surely have sufficient to deal with and I think now of the sceptics. I myself am sceptical, if someone I do not know tells me they are psychic and can communicate with my departed relations then it must be reasonable to expect a little proof? For example my father was a Police Inspector with the  CID serving in the Greater Manchester force. He was what you might call a typical copper, big, tough, analytical, outspoken and honest. Now if a psychic-medium were receiving a message from my dad there is just no way he would want to tell me that I had just bought a new jacket or some other such mundane nonsense. There would have to be something serious, something verifiable in any message given to me before I could accept it really was from my father. But I know he is around me as I have seen him fully materialised many times. That is my proof. Spirit communication is therefore not a matter of faith for me, it is a matter of fact.

The Skeptic magazine is edited by Dr. Michael Shermer a brilliant and highly intelligent gentleman who does not believe for one minute that there can be communication with the dead. He and his colleague James Randi are of the firm opinion that psychic-mediums are nothing more than charlatans who are, in effect, defrauding the public. Randi makes many valid points in his lectures on the falsity of psychics and to a certain extent one can agree with him. For example if you were trying to tell someone your name would you perhaps consider giving them a clue by say whispering your initial as in ‘My name starts with a J.’  I know I wouldn’t I would say, my name is John. So why would a spirit give only an initial? Such nonsense brings the whole matter of spirit communication into disrepute. Dr. Shermer lectures on the gullibility of people and how they can be quite easily tricked into believing they see and hear things when in fact they are deluding themselves. I can see where these two learned gentleman are coming from and agree that some of what we may perceive of as paranormal phenomena is little more than wishful thinking.

The UKs answer to Dr. Michael Shermer is perhaps Dr. Susan Blackmore who for many years conducted extensive research into the paranormal. Her scientific approach led her to conclude that communication with the discarnate was not a verifiable fact. These are her words: ‘It was just over thirty years ago that I had the dramatic out-of-body experience that convinced me of the reality of psychic phenomena and launched me on a crusade to show those closed-minded scientists that consciousness could reach beyond the body and that death was not the end. Just a few years of careful experiments changed all that. I found no psychic phenomena – only wishful thinking, self-deception, experimental error and, occasionally, fraud. I became a sceptic.’ Dr. Blackmore is no longer researching the paranormal.

Spiritualism is unique among faiths in that it provides, through its Church mediums, proof that there is life after death and the communication of spirit is essentially a fact. However, the level of what is considered proof varies from individual to individual. For me the idea that my late father would return to tell me that my curtains in the lounge had just been changed is not only not proof but an insult to my intelligence. Watching TV and observing some fool rolling about on the floor supposedly possessed by the spirit of Dick Turpin makes me doubt their sanity and one wonders what it is doing to the general public? I suspect that most people view such programmes as light entertainment but they actually do a great deal of harm to Spiritualism. Perhaps that is the real reason we are now seeing a vast proliferation in Psychic TV shows, to undermine the truth of spirit communication.

This is a video clip below is  of Gordon Higginson from the 1990s, Gordon was the President of Spiritualists National Union and was a simply brilliant medium. I personally saw him live at Manchester University in 1992 and he was accurate to the extent that he could give telephone numbers. With Gordon Higginson mediumship was not a matter of faith, he proved it beyond reasonable doubt. Do have a look: