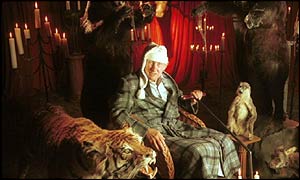 Spike Milligan makes me laugh, his work is timeless and is as funny today as it was when first written. His  ‘An Audience With Spike’, on ITV  illustrated what a comic genius the man was. Anyone over the age of 40 will most likely have happy memories of BBC Radio’s ‘The Goon Show’ in which Spike along with Peter Sellers, Harry Seacombe and for a time the noted Spiritualist; Michael Bentine, entertained us. So why am I writing about a comedian in Psychic World? You may well ask. Well I believe that laughter is a gift from God that uplifts the spirit, and anyone who has made as many people giggle as dear old Mr. Milligan is fulfilling a fundamental spiritual need within us all. Consider this from Spike’s novel Puckoon:

The Irish Catholic priest Father Rudden is trying to raise funds for the restoration of the church. In desperation he has told his congregation that he will perform a miracle and ask The Lord to make fire fall from heaven. The church pews are packed with expectant parishioners as the priest speaks; ‘I COMMAND FIRE TO FALL FROM HEAVEN!’ The sibilant voice of the verger comes wafting hysterically from the loft. ‘Just a minute Father, the cat’s peed on the matches!’.

Why do we find that funny? Well it is in itself an amusing scene, then there is the obvious analogy to be drawn between that little sketch and mediumship. The general public expect miracles all the time from mediums and psychics. If the established church and the priests that serve it had to prove their abilities in the same way that mediums do, then I suspect many would discover that the proverbial pussy had wet their wherewithal.

I once heard a medium deliver a message to a lady in a public demonstration that was worthy of the pen of Spike Milligan. In her late 60’s this dear woman accepted the name given and said it was her late husband whom she had buried over ten years ago. The entire audience sat spellbound as detail after detail issued from the medium concerning the late gentleman. Then, as a parting shot, this little gem came through; ‘He wants to know why you didn’t bury him with his false teeth in?’ The lady looked shocked ‘I just forgot to give them to the undertaker’ she replied ‘I’ve still got them in the bathroom cabinet at home!’. That brought the house down as you can imagine.

There is something about laughter that enriches our souls, quite why it is rarely heard in places of worship is beyond me. However personal experience tells me that many priests consider a good chuckle in church to be totally inappropriate. Within church circles there are often exaggerated codes of conduct that define  acceptable and unacceptable behaviour. As a boy of just 8 years I was a member of Saint Margaret’s Church choir in Prestwich, Manchester. Our choir master was a man of great personal dignity who encouraged his choirboys to follow the fine, gentlemanly example he set. However, boys will be boys, as he found out.

It came the time for the annual choir trip, this being a day excursion to some beauty spot, the choir master selected the seaside town of Southport. We all wore our best school uniforms, caps, shirt, tie and blazer. My mother looked so proud of me as she stood waving us off on the platform of the railway station.

The highlight of the day for me was when I won a bottle of scent on a hoopla stall at the fairground. Unfortunately the cap broke and the contents emptied into my pocket, it was powerful smelling stuff. Then, on the way home on the train, one of the bigger boys grabbed my school cap and, for a joke, flung it out of the window. You can imagine this concerned me as my mother had purchased that cap only the week before. So I returned the compliment and flung his cap through the same window that had accepted mine. It was no easy task! In the process I lost my tie, but gained a black eye. By this time the choir master was in hysterics, pleading with us to stop fighting. Well I didn’t start it.

I shall never forget climbing off the train at Prestwich station. My shirt was filthy, I had no cap, no tie, various bruises and I smelt like Zsa Zsa Gabor’s poodle. The look of abject horror on my father’s face is with me to this day. Mother just glared at me. We drove home in stony silence, with the car windows wide open. Without supper I was dispatched to bed, in absolute disgrace. Some days later a letter arrived from Saint Margaret’s church, quite what it said I was never told, but my parents looked at me in a very suspicious way. Needless to say, my days as a choirboy were over. Looking back on that experience I can smile, but at the time I was made to understand that I had brought some kind of shame upon my family’s good name. It seems that boys can be boys, but not on choir trips.

WHAT TIME IS IT ECCLES? Spike Milligan with The Goons.
There are, within certain congregations, social positions marked by various accepted indicators. These form a kind of pecking order, best Sunday clothes, new hat, top pew etc. Quite how this brings one closer to God I don’t know, some obviously think it does. But have a good look at these people, I see so many miserable looking individuals who are supposedly deeply religious, surely the one thing the search for spiritual truth should bring is happiness. Yet many wear their devotions to their God like a dark cloak that smothers the joy one should feel in living this wonderful life. I am certain the good Lord doesn’t want us to walk in fear, living neat little orderly lives, controlled by sets of sombre religious and social rules. If everyone conformed imagine how dreary our existence would be. Give me an audience with Spike Milligan please, but spare me the new cap, someone is sure to throw it out of a window and I’ve been through all that once.