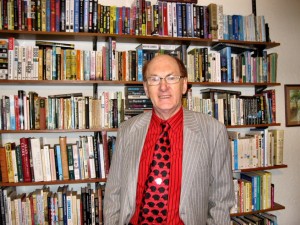 Ron Ellis is based in Southport, Lancashire and he wears many hats, one of them being that of Poet.  I first met Ron in the year 1990 when I was working with the 60s Pop Singer P.J. Proby, Ron knew Jim Proby well and over the months of recording and writing songs for PJP Ron and I met many times.  Eventually we appeared together on a Granada TV programme based on the wild drunken antics of Proby it was titled ‘PJ Probably!’ Ron had worked with the crazy Texan Rock Star in the past and told his tale of misadventure alongside myself and many others who had encountered the ex-trouser ripping singer over the years.  Ron first me PJP when he was a PR representative for a major UK based record label.  During that time Ron met many big names of the swinging sixties, pop stars such as Gene Vincent, Buddy Holly, Jerry Lee Lewis and all of the Merseyside groups including The Beatles.  In this interview with Ron I have tried to discover what has inspired him to become a poet.