Many people ask me how to become a published author and I am now delighted to advise that one can use Amazon/Kindle. I myself have just published again two of my previous best selling books 1. Psychic Pets  2. Animals Make You Feel Better as a single title on amazon Kindle that is now published as Paranormal Pets by John G. Sutton. Here are two of the true stories from that Kindle publication. Go onto Amazon to buy this.

THE DOG THAT OPENED THE INVISIBLE DOOR 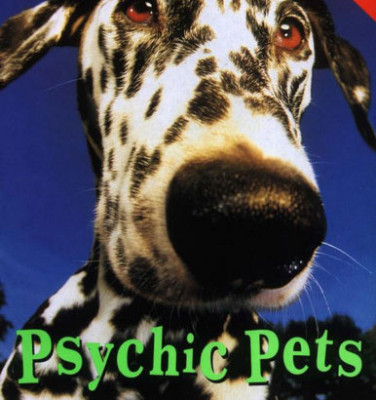 Pets often seem to know when one of their friends is ill or in need of help.  Frequently they will lie close to an injured owner or one of their fellow animals to keep them warm and comfort them.  This story is one example.

It begins in the year 1981 in the little town of Kunumurra in Western Australia with a business executive called Riete Camer-Pesci.  Since her youngest daughter had left for boarding school, Riete returned each evening from her office to an empty home.

Riete’s son Gary, who lived in Perth, worried that his mother might be lonely.  One day he telephoned Riete and told her to go to the airport and collect a surprise present he was sending her.  That present was a purebred German short-haired pointer he called Sam.

At first Riete didn’t much like Sam, who was a skinny thing with a long body and wobbly legs, who needed lots of attention.  However, she soon grew fond of her new pet, and the two became inseparable.  She would even take Sam with her to the office.

Most summer evenings Riete and her friend Sue, who lived on the other side of town, used to drive out into the bush for picnics.  Riete took Sam along and Sue took Ben, her basset hound.  All four used to play and swim together in the river Ord, which was a great way of cooling off from the Australian heat. Their friendship continued in this way for five years.

The bite of the brown snake

Then in 1986 Gary, Riete’s son, returned from Perth to work in Kunumurra. One hot day in November he set off with Sam in tow to visit a nearby farm. While walking along a dusty path, Sam was bitten by a king brown snake.  These snakes are venomous and their bite can be deadly.  The poison quickly spread through the dog’s body and within minutes he was unconscious.  Gary placed Sam’s limp form on the passenger seat and drove as fast as he could back home.

When Riete saw her friend Sam collapsed, she nearly fainted.  But she pulled herself together and drove Sam to the nearest chemist.  She wanted to buy some antitoxin against the snake venom, but when she got there, they had none.  Riete was close to panic, seeing that the life was slipping away from her friend.

From the chemist Riete drove to a vet’s clinic.  There they had a phial of antitoxin, but it was months out of date.  They used it anyway, for it was Sam’s last chance.  The vet injected the dog and handed him back to Riete.  Sam was already on death’s doorstep.

That night Riete held her pet close in her arms and remembered all the happy days they had shared with Ben and Sue out in the bush.  She could hardly hear him breathing and his pulse was very weak.  There was nothing further Riete could do for him.  Before going to bed, she laid him gently on a blanket on the open veranda outside her bedroom.

Suddenly Riete was awake.  She looked at her bedside clock and it said 4 a.m.  Outside on the veranda she could hear something moving.  In a rush it all came back to her:  Sam was ill.  Quickly she climbed out of bed and ran out into the cool night air.  There, standing next to Sam and licking his face, was Ben the basset hound.

Riete could hardly believe what she saw, because the house had a secure perimeter fence all round it and every door was locked.  Ben lived with Sue on the other side of town, a long way off, and each night Sue locked him into his room.  Yet here he was, comforting his sick friend.

Riete checked Sam for vital signs.  There was a pulse, but it was very faint.  She telephoned the vet, who came straight over and put Sam on a saline drip. For days he was on the brink of death.  Throughout that time Ben refused to leave Sam’s side.  He just lay down next to his friend and gently licked his face.

It took over a week of constant care, but Sam lived on.  Within a month he was able to return to the river Ord and swim once more with Riete, Sue and his best friend Ben.

A door in time and space?

To this day neither Riete nor Sue can offer a rational explanation of how Ben got on to the veranda that night when his friend needed him so badly.  Sue, who had been unaware of Sam’s plight, clearly recalls locking Ben into his sleeping quarters inside the laundry room of her home.  All the doors to her house were also locked and the premises were enclosed by a wire fence.

When I spoke to Riete, she told me that it was her belief that the love between the two dogs had opened a mysterious door in time and space.  Through that door Ben the basset hound had travelled on his mission of mercy.

Dede Summerscales is a happily married woman in the Western Australian town of Kalamunda.  Were it not for her cat, her life might have ended many years ago.

The night before the wedding

It was late in the evening of 8 September 1978.  Dede was to get married the following day.  The excitement of preparing for the wedding had really tired her out and she needed to rest.  Dede lived at her parent’s home, a big, rambling old place made out of wooden panels they call weatherboards.

Dede had switched on her electric blanket and the bed was lovely and warm when she got into it.  But just as she snuggled down under the covers, she heard her bedroom door being rattled.  It sounded as if someone wanted to get in.  Thinking it might be her mother coming to check on her wedding dress yet again, Dede climbed reluctantly out of bed.

When she opened the door, her little pet cat Cuddles ran in and jumped up on the bed.  Dede was a bit puzzled by this, because Cuddles always slept downstairs.  As she watched, the cat crawled underneath the sheets and settled down on top of the electric blanket.

Back in bed, Dede fell almost instantly into a deep sleep.  The heat from the electric blanket soothed her tired body.

It was probably less than a couple of hours later that Dede was forced to waken.  Cuddles the cat was licking her face and making a rather odd ‘Meeooow’ sound.  As Dede gradually came out of her sleep, she noticed that the room smelled of smoke.  Something was definitely burning.

Cuddles the cat continued meowing and scratching at Dede’s nightdress.  Suddenly Dede became fully awake and she knew what it was: the electric blanket was about to catch fire.  She jumped straight out of bed and unplugged it at the main socket on the wall.

Cuddles is a hero

The next morning when Dede’s father checked the wire circuit of the blanket, he found that the connection between the electric cord and the woollen material had overheated and begun to melt.  Had she not switched it off when she did, Dede would have burned in her bed, and probably the entire wooden house would have been destroyed by the fire.

Dede told her mother that it was Cuddles the cat who had saved all their lives.  Had he not woken Dede up from her deep sleep by licking her face and pawing her cheek and crying, there would have been three funerals and no wedding.

You can check out and buy John G. Sutton’s Kindle book PARANORMAL PETS on http://www.amazon.co.uk/Paranormal-Pets-John-G-Sutton-ebook/dp/B00CD6ZT8W/ref=sr_1_1?ie=UTF8&qid=1412336975&sr=8-1&keywords=paranormal+pets