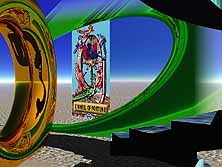 Thomas Edison once said that genius is one percent inspiration, ninety-nine percent perspiration. Now I make no claims in the genius department, though my wife, close family and friends do think I have a great gift for getting into trouble. However, I do believe that many of the worlds great works of literature and music are inspired. If this were not so how could they inspire others. I am thinking of such works as Samuel Taylor Coleridge’s Kubla Khan ‘In Xanadu did Kubla Khan a stately pleasure dome decree etc’. Coleridge had been resting in an easy chair and woke from a light sleep with that poem running through his mind. Taking a pen Coleridge wrote down an outline of the verse he already had spinning inside his brain, he did not sweat blood creating it. Kubla Khan and the damsel with a dulcimer came to him whilst he slept.

Paul McCartney of The Beatles tells the story of how he woke early one morning with the music and words of ‘Yesterday’ playing in his head. He immediately copied these down and one of the most frequently recorded songs of all time was born. Was that inspiration or perspiration?

Now there is a saying that God helps those who first help themselves and I sincerely believe this to be true. This initial phase is the real perspiration, the groundwork that goes in before inspiration can be interpreted with any meaning. Imagine being on the telephone to someone and trying to tell them to write down your name and address. It must have happened to us all at some time. Right; you say, ‘John Sutton’ and they say, ‘Hang on I haven’t got a pen’ or ‘There’s no paper here can you call back’ or ‘You what! did you say Mutton?’. In other words if the intended recipient of the message is not prepared to receive it then no matter how hard the sender tries it will not get through.

That is a very simplified explanation of information being lost through lack of good preparation. In the instances given above, of Coleridge and McCartney, the recipients were both masters of their craft. They had the ability to receive and react to the inspiration they received and had gained this through long years of development. As a writer I awake with ideas running through my head, often at 2am I will jump out of bed, switch on the Word Process programme on my computer and write the outline down.

Now imagine if I had no computer, no sophisticated word process programme, no note pad even or pen, no tape recorder, nothing and had never attempted to teach myself to write creatively. What would I do with the inspired ideas whizzing round inside my mind? The answer is I would most probably turn over and go back to sleep.

Now those in the next world who bring us to inspiration know who is able. It would be useless to give Paul McCartney visions of building a bridge to France, he most probably wouldn’t have a clue about engineering, but this is known to the spirit world. They know who to approach, who is available. Our duty is to make ourselves available through preparing and mastering our God given gifts. Be that as engineers, architects or creative artists.

Sonnet 18: Shall I Compare Thee To A Summer’s Day.

The idea that great writers, composers, poets and musicians sit down and invent their work without inspiration is, to me at least, unthinkable. OK I too have heard the dross that today passes for pop music and I am sure we all recognise that this is low grade rubbish designed to give young people something to throw into their parents dustbins. No serious person considers the work of product groups, that are created by major record labels, as more than cheap preteen pop-culture garbage. There is nothing inspired or inspiring in a gang of fast fading floozies flopping their undistinguished attributes about on junk TV. That kind of bilge is 100 percent perspiration and zero percent inspiration.

When we think of inspiration we should look to works such as those of Wolfgang Amadeus Mozart. As a child of 7 years he was writing symphonies for full orchestras. His lifes work was so extensive; 50 symphonies, 27 piano concertos, 37 violin sonatas, operas such as The Magic Flute and Cosi Fan Tutte etc. that it took a man of some high intelligence,one Ludwig von Kochel, to even list it. Listen to Mozart to hear genius if you doubt that it exists. How other than by inspiration could this mere child have created such a collection of undoubted classical masterpieces. He was dead and buried by the age of 35.

We will all, no doubt, have heard of children who seem to have some unexplained ability. We often hear parents say ‘Well I don’t know where he/she gets it from’. If it is not inherited, and who can possibly think that genetics is solely responsible, then the source must be from elsewhere. The argument is an old one, ‘Nature or Nurture’. Is the child/ adult a product of genetic programming or of their environment?

Carl Gustav Jung suggested that there exists a collective unconscious body of knowledge that is multicultural and available to all who know how to open the door. Is it possible that our great geniuses have the ability to ease back the veil and see into the vast reservoir of facts, figures and imagination that Jung suggests exists in another unseen dimension. Perhaps in dreams those of great creative genius enter this kingdom of collected thoughts and deed seeking and finding inspiration that they then translate using their professional skills. Remember Mozart’s father was himself a musician of wide acclaim and would have taught his son from birth. Thus the door was half open, all that was required was for young Wolfgang to step through into the world of inspiration, was he lead there by those in the spirit world who recognised his potential?

It is my belief that we can all take that step into the unseen land of learning, where we will discover the inspiration we should be seeking to live creative and enriched lives here on earth. Gifted children can make that transition, they are too young to realise that they are walking with angels. We as adults shrink from the absolute blinding power of true knowledge, preferring the half truth, the accepted and the acceptable. We are, in effect, programmed to be ordinary. To be like everyone else is, after all, a very safe bet.

It is my personal belief that those who try to work creatively will, in time and through years of hard work and perspiration, be lead into the world of inspiration by the God who loves them. As I said at the very beginning of this feature, I believe that God will only help those who help themselves. It’s never too late, Cathrine Cookson, the author of hundreds of quite spiritually uplifting books, was over forty years of age when she was first published. That lady was an inspiration to us all.