In the year 1973 I persuaded my dear wife Mary to accompany me to the cinema to watch a film titled ‘The Exorcist’. I had, somewhat disingenuously, told her it was a romantic story concerning a priest and his forbidden lover. Those of you familiar with this film will know that it is in fact about a young girl being possessed by the demon Pazuzu. The plot centres upon the priest Father Damien Karras assisted by the experienced exorcist Father Lankester Merrin who collectively set about an exorcism to expel the demonic entity. The night we went to see this movie the theatre had in attendance a number of uniformed members of the St. John’s Ambulance Brigade, Mary wondered why they were there. That was the very last time my dear wife and I ever went to the cinema together. More than forty two years have passed since that night and still she refuses to set foot inside a movie theatre with me.

The laugh a minute TV show ‘Most Haunted’ has popularised the idea that ghosts are everywhere, especially lurking in dark shadows within spooky looking old buildings. To attract their attention, according to this show at least, one needs night vision cameras, a few weird looking ‘psychics’ and a loud mouthed brassy blonde bimbo shouting ‘If you are there show yourself’. Throw in the occasional screaming fit, have one of the team become ‘possessed’ by a discarnate entity, such as an ape or a dog, a fictitious character even and start uttering total gobbledegook then its Carry On Haunting.  The problem is that the general public accept such nonsense as being the truth. As Spiritualists we know that there really are spirits that have become trapped between this material world and the next. Some spirits have deliberately declined to move on from this material world into the light and their appointed place, they remain between two worlds and at times those who are sensitive can see them. However, these discarnate spirits can and will eventually find their way to the eternal light of God’s infinite love. In the meantime they are most certainly not going to act as unpaid TV show extras pushing wannabe famous ham acting fake psychics in the back. Nor would they start jumping into the physical body of an intellectually challenged moon howling half wit.  However, there are spirit entities, there are actual real haunted houses and at times these do require an exorcism to be performed.

I was recently invited to conduct a psychic investigation of a huge Victorian mansion house with extensions and large gardens. This massive building was located in the county of Yorkshire just outside the town of Bradford and had, in its past, been the home of a rich mill owner. I was accompanied on this investigation by the new owner who had conducted some research into the history of the property, though he told me nothing of this. On entering the large oak front door I was instantly aware that in this house there had been many deaths and it was most definitely haunted. ‘Many people died here’ I said to my host ‘this was at one time a form of hospital or nursing home’ I sensed and he confirmed that was correct. I was drawn to a long corridor in an annexe off the main house and ‘saw’ there in a dimly lit room a vision of a lady on fire. As I described what I had seen I heard a voice tell me that she had taken her own life there by pouring petrol over herself and setting it alight. The gentleman by my side advised that he knew of this incident as he had spoken at length with the former matron of the house when it was used both as a nursing home and, in the annexe, as a treatment unit for recovering drug addicts. Deep within the main house in the darkness of the inner rooms I felt the presence of a spirit and an overwhelming sadness caused me to stop by an old exposed wooden beam. The atmosphere in that room was oppressive and cold I could feel the despair of the discarnate being that had taken his own life there, hanging himself by a rope attached to that grim oak beam.  Again my host advised that he knew there had been a suicide within the property but more than that he did not know.

Once I had established that old dark house had unseen residents I agreed to conduct a form of exorcism, but first I had a duty to guide the discarnate lost souls out of their purgatory into the light of God’s infinite love. It was too late in the day for me to do this and so a time was agreed when I would return and attempt to free the lost souls then cleanse the place of any residual negative energy. Some weeks later I returned with my wife Mary who always accompanies me as a kind of personal assistant. Together we visited the sites previously identified and I began to communicate with the spirit presence within. My aim was to guide them from this their earthly prison out of the mists of purgatory into the wonderful welcoming light of the divine power that we term God. My method is completely secular, in a gentle conversation with the spirits I make no mention of any specific religion or religious belief systems. My advice to the discarnate souls is straightforward as I explain that their life in this particular dimension is over and it is time to move on to the next phase. At times I have found that the spirit disagrees with my advice and on such occasions I call on my previous experiences in HM Prisons, I give them direct orders to move on or else!

It took me some time to persuade the two spirits within that large property to take the path into the light but eventually they did do so. The hanged man was a tragic soul who had been wandering the rooms where he died since he killed himself. I sensed his fear of walking into the unknown where he was convinced punishment for his suicide awaited. Once I explained that his ultimate destination was in the light of forgiveness and understanding the spirit of this man accepted. I did not see the discarnate spirit, but I heard a silent voice saying a form of farewell and the temperature of the room changed from oppressively cold to a fresh lighter feel.  Also, strangely, the darkness that had filled the area switched to a new brightness as the sun shone in from a formally unseen window.

The next task for the completion of my duty as the exorcist was to remove from within those walls all residual negative energy. Mary had brought with her a number of sage bundles that she now lit and they produced powerfully pungent smoke. I had brought a small bell with me that I rang loudly as together Mary led us from room to room and I gave stern instructions in deep stentorian tones that this house was now a place of happiness and joy.  I also sang a little song in the very heart of the house, this was a former ballroom with a massive white marble fireplace. The owner gave me a very old fashioned look as I began ‘Knees up Mother Brown…Knees Up Mother Brown..Knees up Knees up….Don’t get the breeze up…Knees up Mother Brown’.

At the end of the day as we all stood in the hallway I looked back towards the mighty dark oak staircase and saw shining there a brilliant sunbeam glimmering through a large ornate window. The whole house felt vibrant and in a way at peace with itself. You see I believe that everything in the universe is alive and has an awareness of what it is i.e. I know I am a human being, a pen knows it is a pen and that gigantic old Victorian house knew that it would once again be a mighty mansion.

Over the following months the new owner spent hundreds of thousands of pounds renovating the property and making it into a spectacular residence. It was converted to  six large executive style apartments and is now a happy home to a number of contented people. I am told that no one has experienced any kind of distressing  paranormal activity within those walls and it is a wonderful place to live. Though  as for the owner, he tells me that every time he stands in what was the old ballroom a haunting melody pops into his head…’Knees up Mother Brown’…

I am John G. Sutton you can contact me via my website WWW. Psychicworld.net Why not read my latest book ‘PSYCHIC SCREW’ available on Amazon in paperback or as an E-Book on Kindle. 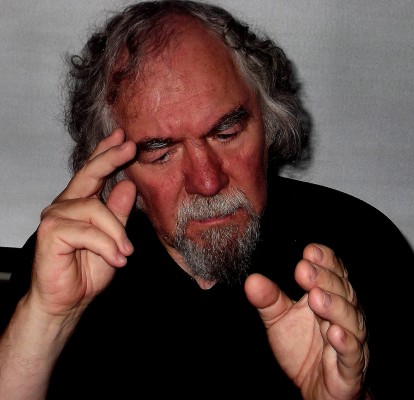