DYLAN THOMAS: Do Not Go Gentle Into That Goodnight

DYLAN THOMAS: Do Not Go Gentle Into That Goodnight

Do Not Go Gentle Into That Goodnight 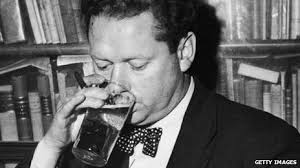 27th October 2014 is the centenary of the birth of  Dylan Mariais Thomas. Dylan Thomas was born in Swansea, Wales and he is perhaps the best known of all Welsh poets. At the age of just 39 years Dylan Thomas was dead, he died on the 9th November 1953 of drink and middle age, so the poets say, but in fact his cause of death was diagnosed as being from pneumonia with various complications including a lung disorder. There was also the contributing factor of alcohol because Thomas had, according to a statement he made in the ChelseaHotel in New YorkUSA where he was staying, consumed 18 straight shots of whisky.  You see Dylan Thomas was a notorious boozer, a riotous drunken wobble of a man who had to be locked into the wooden shed at his home The Boat House in Laugharne, Carmathenshire by his wife Caitlin to ensure he worked at his craft of poetry. Otherwise Thomas would have spent most of his time at Brown’s Hotel in the village drinking beer till he was so intoxicated he could hardly stagger home.

I first encountered the work of Dylan Thomas during the Autumn of 1975 when I was a young man working in Wormwood Scrubs one of Britain’s most notorious jails. Another member of staff there one Paul Collins suggested I listen to a recording of Under Milk Wood featuring the mellifluous voice of Richard Burton. I took the recording of the play to a quiet corner of the officers lounge and put the record on the player there: ‘To begin at the beginning:It is spring, moonless night in the small town, starless and bible-black, the cobblestreets silent and the hunched, courters’-and-rabbits’ wood limping invisible down to the sloeblack, slow, black, crowblack, fishingboatbobbing sea.’ I was captivated by the imagery, suddenly I was no longer within the walls of a dark Victorian prison, I was running down the rain glistening cobbled lanes of a seaside Welsh village past Dai the bakers shop into Donkey Street where blind Captain Cat is sitting dreaming of long dead shipmates waiting for The Sailors Arms to open. It was absolutely magical and from that moment on I was hooked on the works of Dylan Thomas. The next day I found time to visit the local library and borrowed a copy of his collected works. 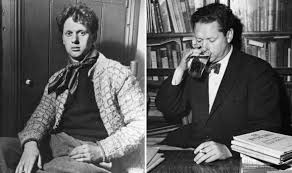 What is that all about really? You may well ask so I will tell you what I feel about the poem. It is, for me a poem about the imminence of physical death, a final word to a dying man as he prepares to enter infinity. Look at the way Thomas uses images of nature, Lightning a force of nature, a green bay of the sea, the sun itself the source of light, meteors that blaze across the universe, in all those images Thomas is showing us that this life, which is ending now, has visited all the corners of this planet we call Earth and experienced much. There is regret in the poem as Thomas points out that too late we learn that actions and decisions taken in life usher in the dark. Throughout the poem there is the almost stentorian rhythmic chanting of Rage, rage against the dying of the light, like a militaristic command thumping out the message.  In the end this poem works its mystical magic by allowing each of us to feel the almost forlorn falling into endless sleep of the loved one slowly slipping away. Do not go gentle into that goodnight…..

Over the many years since I first listened to Richard Burton reading Under Milk Wood I have seen and heard the play for words many times. In one reading of this play, at The Palace Theatre in Manchester, Dylan Thomas’ daughter Aeronwy Bryn Thomas played the harp and it was most enchanting. I even went to a jaz music version of Under Milk Wood that was something else to behold, really mystical. There is something seriously special about the wonderful way Dylan Thomas works his craft with words and his collected poems are available to all. There are even many recordings of Dylan himself reading his poems and these are available on CD through Amazon etc. I would highly recommend listening to the poet reading his work he has an incredible voice, deep and booming, soaring and sensitive at the same time.

It is now one hundred years since the birth of Dylan Thomas and his poetry is as alive today and fresh as it was in the days directly after WWII when he wrote most of it.  His short life was lived to the full though he was addicted to alcohol that did not prevent him from making an indelible impact on the literary heritage of Wales and Great Britain.  There is a bronze statue to Thomas in his home town of Swansea and a blue plaque on the house where he was born. In CwmdonkinPark where he played as a boy there are a number of stone monuments each engraved with quotes from his work. My favourite is from his poem about lost youth ‘Fern Hill’ it reads ‘Oh as I was young and easy, in he mercy of his means, time held me green and dying, though I sang in my chains like the sea’.

Dylan Thomas did not go gentle into that goodnight he drank 18 straight whisky’s and slipped into a coma from which never was again able to rage against the dying of the light. He was buried at the church of St. Martin’s in the village of Laugharne on the 24th November 1953.  The wake for Thomas took place in his favourite pub, Brown’s Hotel where he spent many happy hours drinking with his best boozing buddy his dear wife Caitlin. 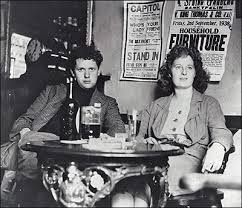