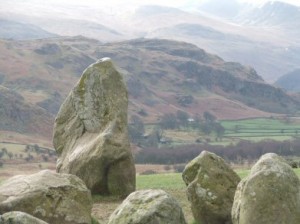 Of Druid stones, upon a forlorn moor,

When the chill rain begins at shut of eve,

Some three miles north-east of the Cumbrian town of Keswick, on Chestnut Hill, stands Castlerigg, a Neolithic stone circle estimated to be over 5,000 years old.

There are a total of thirty-eight stones of various size and shape forming a not perfect circle. There is what appears to be a form of entrance to this circle marked by two large stones that face north towards the towering mass of Skiddaw and Blancathra fell. 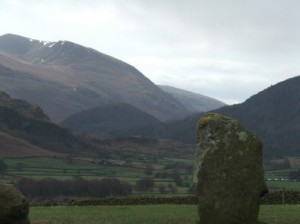 There are numerous theories as to what the stone circle at Castlerigg was created for. In April of the year 2006 Psychicworld.net sent John G. Sutton and Mary Sutton to investigate. 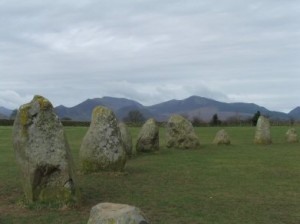 The stones appear linked with the seasons, as with other ancient sites such as Stonehege. The sun raising at the solstice between specific stones indicating that the year is reborn and life continues.

There is breathtaking magnificence to the area surrounding Castlerigg, with the stone circle at its centre. Towering peaks and meandering valleys roll into the distant blue hills. This is truly an awe inspiring vista. 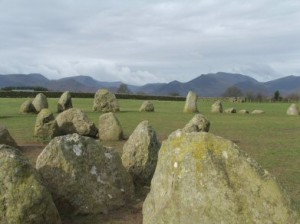 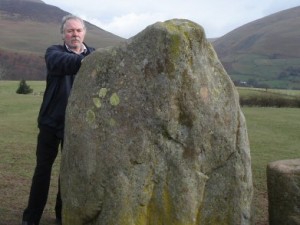 John G. Sutton tuning in to one of Castlerigg’s standing stones.

The circles psychic energy resonated with echoes of long ago ceremonies which remain locked into the physical stones themselves. Placing hands on the surface of the stones and using psychometry to ‘see’ the hidden images I became aware of roughly clad hordes milling around me intent on some unspeakable mission. I felt both terror and elation, fear and a sense of power. I was at once the victim and the executioner. I felt that here men had sacrificed their fellow human beings to some long forgotten diety, possibly the moon or the sun. Castlerigg stone circle has a highly charged psychic atmosphere emitted by those ancient standing stones that bore witness to the darkest of deeds committed in days long past.