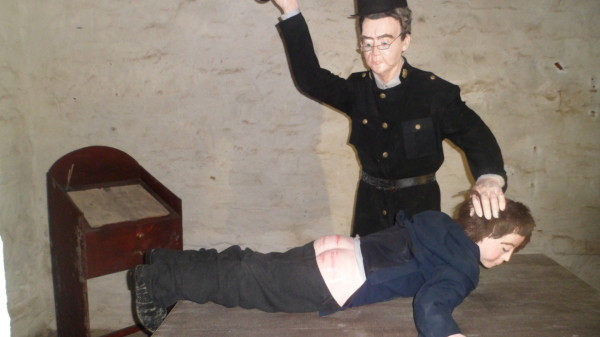 In February of this year my wife Mary and I were visiting Cornwall investigating the spiritual power of the area. We had been well and truly lost on Bodmin moor where I had inadvertently managed to drive us up a steep dirt track to Hawk’s Tor. That Tor, with its standing stones and remote crag had an intense eerie supernatural atmosphere which electrified my psychic senses.  Once we found our way out of that desolate location Mary suggested we proceed to the actual town of Bodmin and visit the old jail. She had previously read a brief history of this decommissioned prison and I had seen the ridiculous episode of ‘Most Haunted’ featuring the jail in which Derek Acorah pretended to be possessed by the spirit of an imaginary former jailer. The parapsychologist Dr. O’Keefe working with the ‘Most Haunted’ investigators had laid a trap for Derek by getting his assistants to discuss a supposedly infamous, but completely fictitious, South African jailer called Kreed Kafer. Derek had obviously heard this fabricated story, swallowed the bait and when the TV cameras were filming him he faked a trance and fraudulently acted out possession by the non existing spirit of Kreed Kafer. The name is an anagram of Derek Faker which he proved himself to be whilst filming in Bodmin Jail. I recall watching that episode and laughing out loud at the utter stupidity of it. You have to hand it to Acorah, he is a natural comedian. 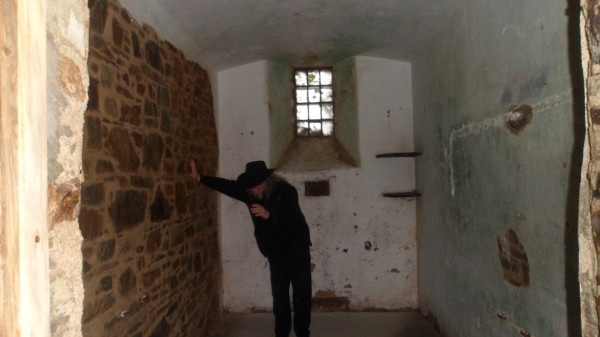 Bodmin Jail was initially commissioned in 1778 as a CountyJail, a Debtors Prison and House of Correction.  The population of the jail increased dramatically following the end of the Napolionic Wars in 1815 so that by the 1820s all the cells were occupied.  There were sixty executions at the jail and many of these were open to the public. The usual method was to fasten a noose around the neck of the condemned and drop them a distance so that the large knot in the rope snapped their neck killing them instantly. At one point the jail had a new execution shed built that was ruled unlawful by the inspectors of prisons and it was not sufficiently open to the public view. In those days ‘justice’ had to be seen to be done, if you can possibly call hanging someone for stealing a sheep justice that is. On one occasion over 20,000 people attended to watch two condemned men hang. The year was 1840 and two brothers William and James Lightfoot, were strung up and hanged before the mob.

Inside this old jail they have created a form of chamber of horrors with numerous mannequins dressed in period clothing depicting disgusting scenes from the prisons grim past. There are silent enactments of floggings, of strangulations and beatings, force feeding etc. All manner of man’s inhumanity to man is to be seen there. Mary and I managed to see inside the main cell block and I did experience there a sense of being observed as a certain area had a distinct and noticeable lower temperature. It has often been my experience that when entities from the spirit world are present there is around the specific area an actual chill and also an unearthly stillness. As we passed through the jail and came close to the long dark corridor of cells I felt that unmistakeable sensation.

This part of the main cell block had been the central location for inmates and something wicked walked within those walls. I felt that there had been a malevolent force, possibly the nature of the harsh regime itself, that had seeped into the stones themselves. Mary had the camera and agreed to help me so with some slight trepidation I entered a particular cell that had an unusual atmosphere. Using psychometry I tuned in to the memories there placing my hands against the cold brick walls and allowing the images to enter my mind. As I did so a name came to me I heard this quite clearly ‘Everest’. At first I thought this was connected to the Himalayan mountain but then I heard again ‘John Everest’.  This was clear in my mind and I asked Mary to make a note of that. The cell I tuned in to appeared to be full of dark images of despair, misery and desolation, I felt the sadness of long dead prisoners impregnated into the very fabric of the jail.  Within that cell countless hundreds of inmates would have wailed their lives away in the interminable gloom of this dirty dungeon.

During renovations to restore the jail a horrible discovery was made they found an ‘Execution Pit’ that is a specially constructed unit for hanging prisoners. You can visit this disgraceful testimony to a time thankfully passed and see where many met their awful ends in Bodmin Jail. Mary and I stood there and looked at the noose and noted that it is fully working as the hanging pit has been fully restored. Just standing by the side of that dark place I felt again the unearthly chill and saw for a moment a dark shadow shift across the far corner of the room. There is no doubt in my mind that this area and the main cell block unit at Bodmin Jail are impregnated with human despair. The invisible power of the highly charged emotions experienced by prisoners about to die has imposed an unearthly atmosphere on the area. That is it actually feels closely connected to the next dimension of life and is, I feel, a portal through which troubled discarnate souls may communicate. Hence there are numerous reports of ghostly encounters at this old jail.

In conclusion I would say that yes Bodmin Jail is in the generally accepted use of the term ‘haunted’. There is certainly a presence within those ancient walls that tingles ones psychic senses. There are also entities present as when Mary checked on the name I had heard in that dark lonely cell she found that John Bentham Everest was the Governor of Bodmin jail for many years during the early 19th century.  You really should go and see this old prison if you are in Cornwall as it is a brilliantly presented museum depicting the horrors of life behind bars two hundred years ago. The jail is open 364 days a year from 10am to dusk, just call this number for further details  01208 76292

There is available at Bodmin Jail a regular ‘Ghost Walk’ that is professionally organised and can be booked in advance.  I believe the cost is £75 but for that you get an overnight adventure inside the jail and your tour is led by an experienced Psychic-Medium. If you are interested in such an encounter then the number to call is  01208 76292 or you can book online at the website WWW. Bodminjail.org

I am John G. Sutton and you can read my book about jails ‘PSYCHIC SCREW’ on Amazon.co.uk this is brand new and tells the story of my work as a recruit to HM Prison Service when I worked at Wormwood Scrubs and Strangeways jails. Yes they were haunted and the true life accounts are in my book.